Kristin Heinonen is a digital trend analyst at Medievarlden, a subscription service for media executives, as well as Program Curator at The Conference, an international digital conference with 3000 visitors from around the world. As a digital strategist Kristin has worked for some of Sweden’s best known companies and large media organizations. She is also listed as one of the most creative people on the Swedish web scene by Internet World magazine, is a co-founder of Sweden Social Web Camp, Scandinavia’s largest unconference on the social web and the future of the Internet and is actively engaged in the development of emerging digital talent as a member of the steering committee of the digital business program at Hyper Island. She joins us from Malmo to discuss the role of the digital strategist in Sweden. You can hear our conversation in iTunes, Stitcher or Soundcloud or below now.

In a previous episode we explored the focus on modernity that characterizes the work of the digital strategist in Scandinavia. It turns out this progressive, mature digital market is built on extremely farsighted investments made by the Swedish government in the 90s. These investments in broadband connectivity, focused on connecting virtually every Swedish household produced a very early digital entrepreneurial culture combined with extremely high social media adoption rates. In fact, until it was overwhelmed by Facebook, Lunarstorm, a social media network in the 90s was used by between 80% to 90% of all Swedish teens. Today, 90% of Swedes pay bills online, including those 70+, while at the other end of the spectrum 90% of babies use iPads. Once again, it is the Swedish government that is at the forefront of setting the bar on digital services. Now half of the Swedish population use mobile IDs to access government services online. What’s more, these services continue to set the bar for expectation on digital user experience. An example Kristin gives is the Swedish Social Insurance Agency that administers services and benefits. This is a government organization that every parent in Sweden needs to deal with, a task that used to be extremely tedious. Now, there is an app to use that, at the push of a few buttons allows parent to access benefits. There is even a Facebook page that parents can use to ask questions, and where they can expect almost instant answers.

So what does this mean for the development of digital strategy in Sweden? ‘When government provides you with simple digital services it spoils the population and sets the bar for companies…this turns into a competitive advantage’. Kristin points to conversations where people choose banks not based on rates, but on who has the best app. As she says, ‘well crafted digital experiences from an early age and from a lot of government agencies sets the bar for companies to be as effective and as smooth or we will not choose them as customers…people are so busy running their lives online that if you want some attention you better deserve it.’. Swedes have risen to the challenge of these expectations by applying ‘mind-blowing creative’ in the digital space such as the famous ‘epic split’ ad for Volvo Trucks, or promoting Sweden as a country through the World’s most democratic Twitter account, giving a different ordinary Swede the opportunity to be the voice of Sweden (@Sweden) each week.

In this environment, where digital marketing is a given and there is no need to convince people of the need to use this channel for business purposes, the work of the digital strategist is to think of new ways to align with user expectations, to ‘look at your clients and see what actual problems we can solve for them…to stop using digital to just talk to them…give them the power to do things, ask how can we use digital to do things that are smart that makes the customer feel powerful’. This is what the most interesting companies in Sweden are doing. As Kristin says, ‘most interesting agencies and studios don’t run campaigns, they develop services and products’. She gives the example of Spotify, a company that is built to ‘disrupt the old business model by providing an excellent service’. She tells the anecdote of how the CEO found that when faced with the difficulty of explaining a disruptive idea to top music executives, his creative solution to help them understand it was to give the children of these executives free accounts, and only then did they understand the power of the idea.

Kristin started in this environment as a broadcast journalist and producer, working on one of the biggest news shows in Sweden, a show that in spite of capturing almost a million listeners did not generate a single email. The aha moment for Kristin came when she was producing a podcast on the Swedish startup scene and after a couple of months it started generating considerable engagement among the audience. The moment of proof came when they announced they were going to be in Stockholm and invited listeners to meet them at a local bar, and 50 of them turned up. This showed Kristin that there was considerable power in digital channels, in contrast to mass communications that are ‘not that attractive if you want to achieve something’.

It was this type of side project that Kristin sees as most valuable to those starting out in digital strategy in Sweden. She advises people to ‘do your own projects…so you can show someone what you actually achieved…if you are going to advise others you need your own experiences…you will learn so much from that and you will learn so much faster’.

2 thoughts on “Episode 24: The Digital Strategist In Sweden – A Conversation With Kristin Heinonen” 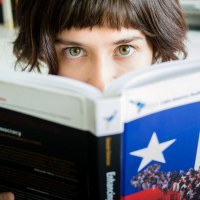